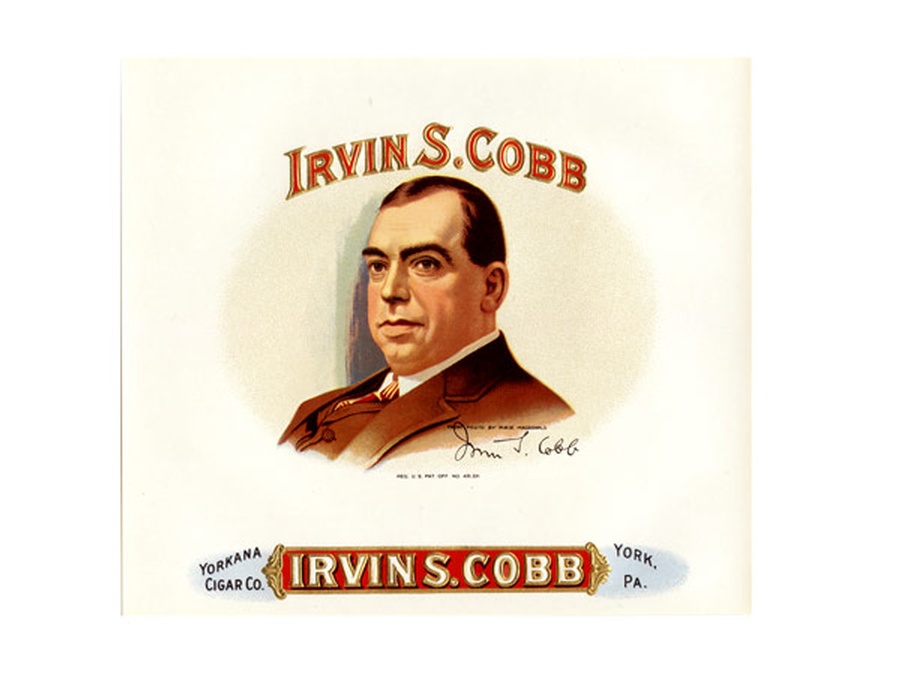 This beautiful inner cigar label dates to the 1920s-1930s and is in pristine condition. The label measures 8.4” Wide x 7.4” High and is embossed chromo lithographs with beautiful gilding. The cigars were from the Yorkana Cigar Company of York, Pennsylvania, and feature an image of the American humorist and writer Irvin S. Cobb from a photo by Pirie MacDonald.Irvin Cobb started in journalism on the Paducah Daily News in his hometown of Paducah, Kentucky at age seventeen, becoming the nation's youngest managing news editor by nineteen. He later worked at the Louisville Evening Post and moved to New York in 1904, where he was hired by the Evening Sun, who sent him to Portsmouth, New Hampshire to cover the Russian-Japanese peace conference. His dispatches from the conference were published across the country under the title "Making Peace at Portsmouth" and earned him a job at Joseph Pulitzer's New York World making him the highest-paid staff reporter in the United States.

Cobb covered World War I for the Saturday Evening Post, and wrote a book in 1915 about his experiences called Paths of Glory. Several of Cobb's stories were made into silent films. He married Laura Baker of Savannah, Georgia, (Our home town) and was described as being round with bushy eyebrows, a triple chin, and always had a cigar in his mouth. Cobb is best remembered for his humorous stories of Kentucky local color. These stories were first collected in the book Old Judge Priest. He died in New York in 19944 after authoring more than 60 books and 300 short stories and was cremated in his hometown of Paducah, Kentucky.