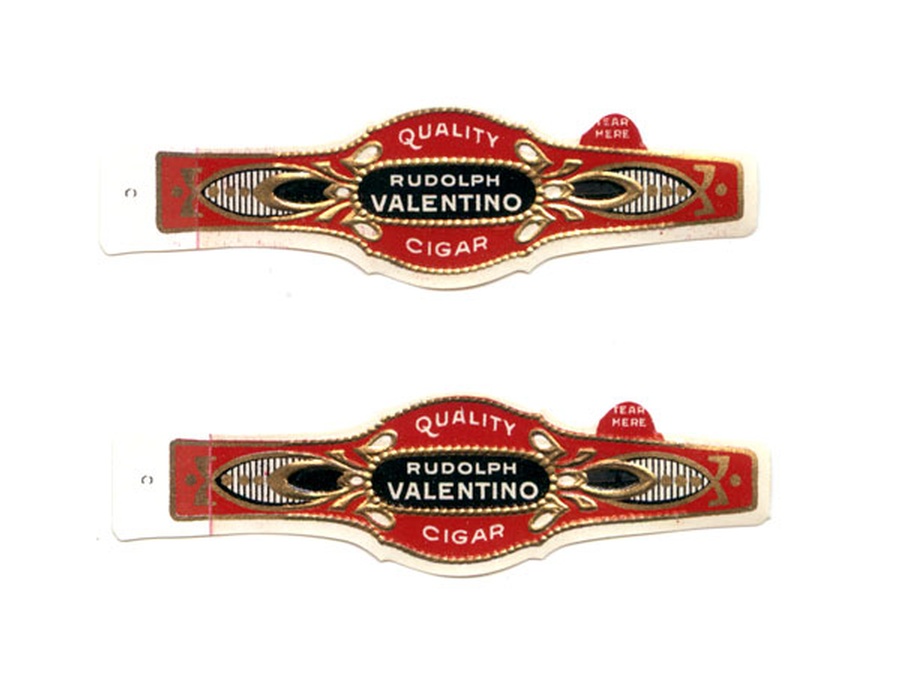 These Rudolph Valentino cigar band labels measure 2.75" Long x .75" Wide and are in mint condition. You get two (2) embossed and gilded cigar bands from the 1920s which read "Rudolph Valentino Quality Cigar". His untimely death probably explains why these labels were never used and they have become difficult to find.

Rudolph Valentino arrived in New York City in 1913, as an 18-year-old immigrant from Italy, without speaking a word of English. He could only land jobs like gardening and dishwashing. His good looks came to his rescue when he became a dancer in New York nightclubs and was, in fact, a gigolo for lonely society women. He was led ultimately to Hollywood where he sarted his film career. Post-war women went crazy for his dark, mysterious looks, and the wanton way the sheik treated the heroine, both in sharp contrast to the "boy next door" films of the time. He was idolized by the female fans of the 1920's like Elvis was in the 1950’s. At public appearances, fans mobbed him and Valentino was receiving about 10,000 fan letters per week.

Valentino's last film, and one of his best, was Son of the Sheik. While on a promotional tour, he collapsed at a party in New York with appendicitis and a ruptured ulcer. One week later he died of blood poisoning. When his female fans got word of his impending death, the hospital received 2000 calls per hour. One week later on August 23, 1926 Valentino died of peritonitis from a perforated ulcer at the age of 31. The nation was in shock and there were riots at the funeral home, as fans charged past police to see the body. Allegedly, upon news of his death, some women actually committed suicide.

Valentino left behind a mountain of debt and his estate had to be sold at auction. He did leave a lasting legacy of creating a new type of romantic hero, paving the way for Clark Gable, Errol Flynn and all those who came after him.