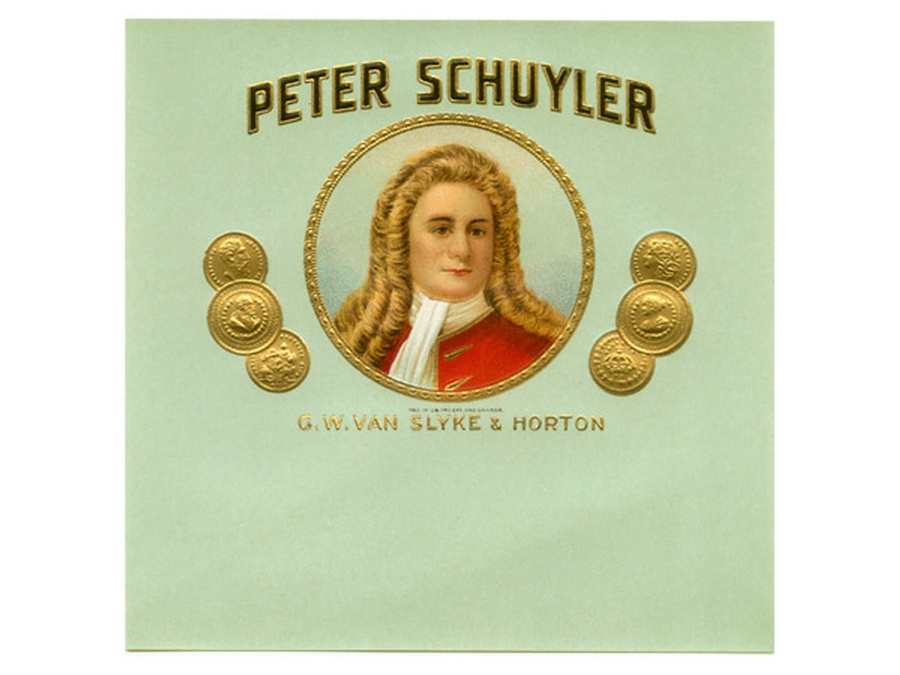 This vintage cigar label measures 6” Wide x 5.9” High and features a great detailed image of Peter Schuyler. The label is embossed with gold gilding and shows it was registered in the U.S. Patent Office and Canada. The label was printed by the Schmidt Lithograph Company of San Francisco, California for G.W. Van Slyke & Horton of Red Lion Pennsylvania. They began producing Peter Schuyler cigars in 1889 in Albany, New York.  Van Slyke & Horton purchased a number of cigar manufacturers through the years including T.E. Brooks Co. who purchased the last cigar manufactures in Greensboro, South Carolina. G.W. Van Slyke & Horton are still in business today in Red Lion, Pennsylvania.

Peter Schuyler was born in Albany, New York in 1657 and was the most influential Indian expert in New York province. Albany was the northernmost settlement in New York and joined French Canada by several waterways. Schuyler became Albany’s first mayor in 1687 when it was incorporated as a city. His fame really came when he led a party of English and Indians against the French who were trying to encroach on the English settlements and border lands near Canada. Schuyler was successful in his attack largely because of his wonderful relations with the Indians of the Five Nations.

Schuyler served as governor of New York from July 1719 to September 1720. He continued throughout his life to serve as Indian commissioner and as a member of the provincial council. He died in 1724.

WE GUARANTEE ALL LABELS TO BE AUTHENTIC AND AS DESCRIBED!