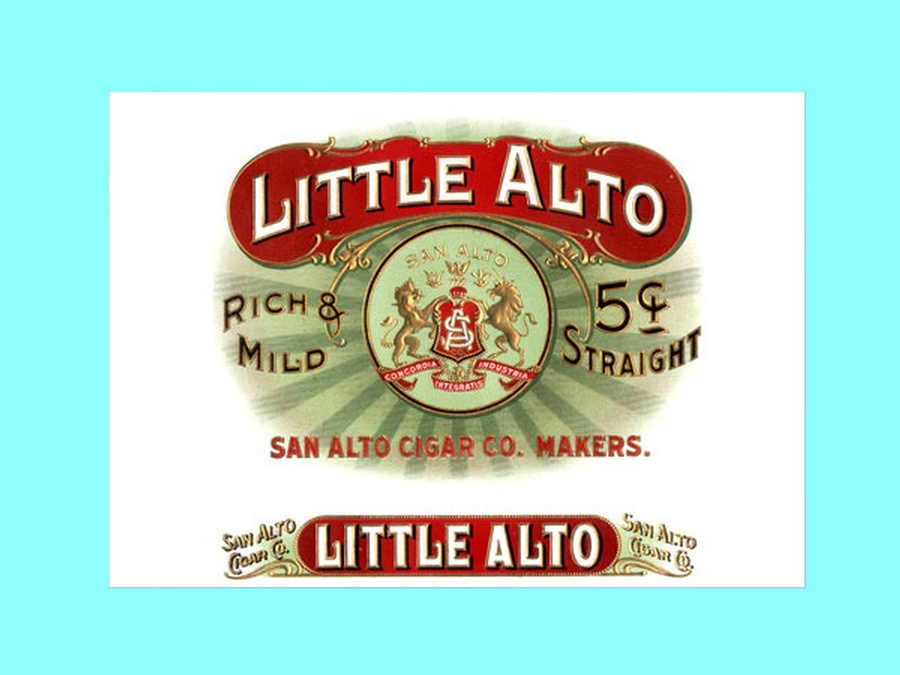 This vintage inner cigar label from the San Alto Cigar Company measures 8.5” Wide x 6” high. It is embossed throughout and has vibrant colors. The cigar label dates to the 1930s and the cigars were produced in Tampa, Florida.

The production of cigars in Tampa, Florida, started in 1885 when Don Vicente Martinez Ybor, an influential cigar manufacturer and Cuban exile, moved his cigar business from Key West. Eventually, nearly 12,000 people worked in the more than 200 cigar factories that were established in what was known as Ybor City, the “Cigar Capital of the World”. Most of the residents of Ybor City made their living making cigars or found jobs in a cigar-related trade. Some made cigar boxes or cigar bands, others owned restaurants where fans of “No Smoking“ signs were refused service.  The Great Depression, the popularity of cigarettes, the emergence of organized crime, and the creation of cigar-rolling machinery all led to Ybor City’s demise. This was made even worse when machine made cigars owners started a “spit campaign,” a campaign promoting the idea that saliva from the cigar rollers was incorporated into a finished cigar. This drastically hurt the hand rolling cigar business and by the 1930s, as machines replaced workers and Cubans went back to their homeland, Ybor City lost its place as the cigar capital.